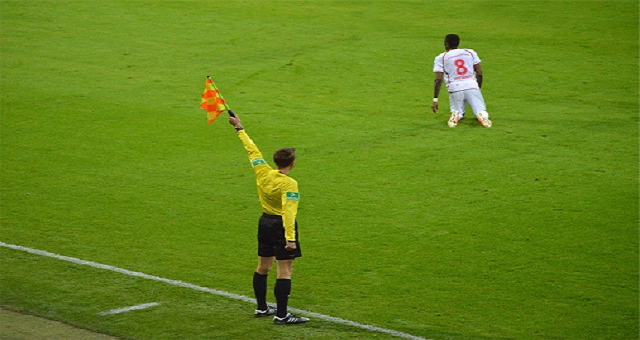 Understanding the rules is a key when you are new to any sport. Soccer rules are not complicated and more you will watch and play the game itself, more you will understand. But if you start with a reading of official rules of soccer you will be probably exhausted, confused, and sick. Therefore we try to write the most important rules of soccer as simple, readable and understandable as it is possible for you.

As a short explanation of Soccer Rules as possible

Soccer is a game for two teams (11 players each, 10 in field players and 1 goalkeeper). Soccer is played with a ball. Players with an exemption of goalkeeper are not allowed to touch the ball with a hand. They can just kick the ball. A goalkeeper can use his hands, but just in the penalty area. The aim is to score the goal, in other words, kick the ball in the goal. Who scores more goals wins.

And now longer explanation follows (but still as simple as possible).

Soccer is played on grass (turf) field. Grass can be natural or artificial. Artificial Grass has to be approved for competition matches and has to be green.

A goal is scored when a ball crosses the goal line between the goal posts. 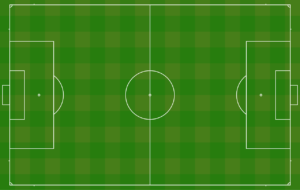 White lines on the field are 5 inches wide. There are goal lines, touchlines and half-way line which divides the pitch into two separate halves. The center circle in the center of the field is 10 yards (9.15 meters) from center mark.

There are also corner arcs in each corner to show an area where a ball can be placed before corner kick.

Every soccer game is played with two opposing teams. Each team has 11 players on the field. One of the players is a goalkeeper, who has right to use his hands in the penalty area.

There are another 5 to 12 players on the bench during a game, prepared to substitute any player on the field. The number of bench players depends on maximum limit allowed by particular soccer competition.

Substitutions are limited to three for every game. It is up to coach decision when the substitutions will be made or not.

The Duration of Match

A soccer match is played for 90 minutes. A match is divided into two halves, both 45 minutes. There is 15 minutes break between halves and after it, teams changed their sides.

Time is not stopped during a play when a ball is outside of the field. A referee has right to add so-called „injury time“ at the end of each half to replace the time when a game was not played due to injury or substitutions. Usually, it is from 1 till 10 minutes, depending solely on referee decision.

There are four to six referees at a soccer match. One is the head referee, two are lines referees, another one is the assistant who is outside of the field, and in some matches (e.g. champions league) there are other two goal referees. In past year a new Video Referee Assistant was introduced.

The head referee is responsible for ruling in the game. He can consult with other referees in case he is not sure about some play or foul. However, the final decision is in hands of head referee.

Lines referees are responsible for deciding if a ball is out of the field.

The assistant referee out of the field is responsible for dealing with substitute players and coaches on the benches.

Video assistant referee (VAR) is a referee who follows actions on TV and thanks to video footage he can consult with the head referee about four major types of situation. Goals, Penalty, Red Card and Identity mistake decision are the situations which can be consulted with VAR to make a clear and undisputed decision.

Foul is a situation when players make unfair contact with a player from opposing team trying to stop him in his action.

Foul is also when in field player touches the ball with a hand.

Foul is when goalkeeper touches the ball with a hand outside of penalty area.

Fouls are reviewed and judged by the main referee. He decides what penalty will be awarded. Usual penalties are a yellow card, red card, The Free kick, The Penalty Kick.

After foul, the damaged team has right to start to play with the free kick.

Team with a suspended player has to finish the match without him (he cannot be substituted).

The Free Kick is played from a place when foul took place. It is performed by a player of one team and players of opposing team cannot be closer than 10 yards (9.15 meters)

When foul is committed inside the penalty box, the penalty kick for a damaged team is awarded.

The Penalty Kick is played from the Penalty Mark by one player. A player shoots the ball on goal. Just goalkeeper can save the kick, no other players are involved.

Ball outside the Soccer Field (The Corner Kick, The Goal Kick, The Throw-In)

There are three possible ways to restart the match if the ball leaves the field and cross the goal lines or touchlines.

After ball crosses one of the touchlines, the ball belongs to another team than the team who touches the ball as last before it left the field. The game restarts with the player throwing the ball back to the soccer field.

The Corner Kick is kicked from the corner of the field and is performed by a player of attacking team when players of defending team cannot be closer than 10 yards (9.15 meters).

The Goal Kick is kicked from the Goal Area and is performed by a player from a team who was awarded with goal gick. Player from opposing team can not be closer than 10 yards (9.15 meters).

In the end, we will wrote about offside. Offside rule is probably the most misinterpreted rule in soccer. Even long-term soccer fans are not absolutely sure when it comes to offside. We try to put it as simple as possible.

Offside is when in time of assist (touch of the ball by the player who is kicking the ball) there are less than two defending players between a player who will receive the ball and goal line.

In that case, line referee will give a signal to the head referee to interrupt the match and award ball to the defending team.

One common mistake lies, that when counting the defending players between the goal line and player receiving the ball, do not forget on a goalkeeper.

And that is all. Hope this shortened rules in simple language were useful enough for you. If you want to study further please go to official rules book published here (but it is so long) or try one of the books below: