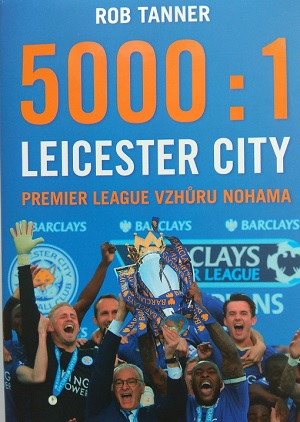 Books about sports are usually about something we already know how it finished. This book is the same. All football fans know the Leicester City story from the 2015/2016 season. Still, you can find a lot of interesting information there.

You can buy this book/e-book on Amazon here.

Everybody knows how Leicester City beat the odds in 2015/2016. Team, who was almost relegated the season before, made a miracle by winning the Premier League title. Yes, they were better than all the other clubs, with bigger budgets like Manchester City, Chelsea, Arsenal, and Manchester United. 2015/2016 was the season when Tottenham fans realized that they will never win Premier League.

The story plot is clear, and I bet that 90% of you remember the news about how betting companies lost a fortune (not true, but good marketing) in 2015/2016. Vardy, Mahriz and Kasper Schmeichel become famous that year. Almost all of us followed that season waiting on Leicester flop. And that never happened.

However, nobody of us probably lived that story in Leicester City itself. Rob Tanner, the author of this book, is a football correspondent of Leicester Mercury, the local newspaper. He is the man who knows how the average citizens of Leicester felt about his club that year. He wrote a lot of blog posts and articles about the club in that single season and also in the season before and after. He knows the city, he knows the club, he knows the players.

The book is a great combination of his blog posts from that season and his commentaries bringing the wider picture. All in nice chronological order, day by day, month by month. You can relive that miracle again, now through the eyes of Rob Tanner.

You know how it ends, but you definitely do not know all the things that happened that season in the club. Rob Tanner provides excellent insight view to the club and all related to football in Leicester. Moreover, you will get look at the work of the local journalist who covers the subject that became famous.